Our story
The catering of yesteryear has, but with a few exceptions,
dissipated into the murky depths of extinction.

I do hope you enjoy reading this, as much as I hopefully will one day enjoy cooking for you. Some may say that a web site should be short, sweet and to the point. I happily disagree with this viewpoint and I’ll argue this ” Till the cows come home ” (The proverbial bull in the personality of astrology just may be a viable reason for this trait.) With the advent of Upmarket food stores showing off the latest fashions, the caterer must surely add personality into the mix of creativity. Howie is just such a personality. 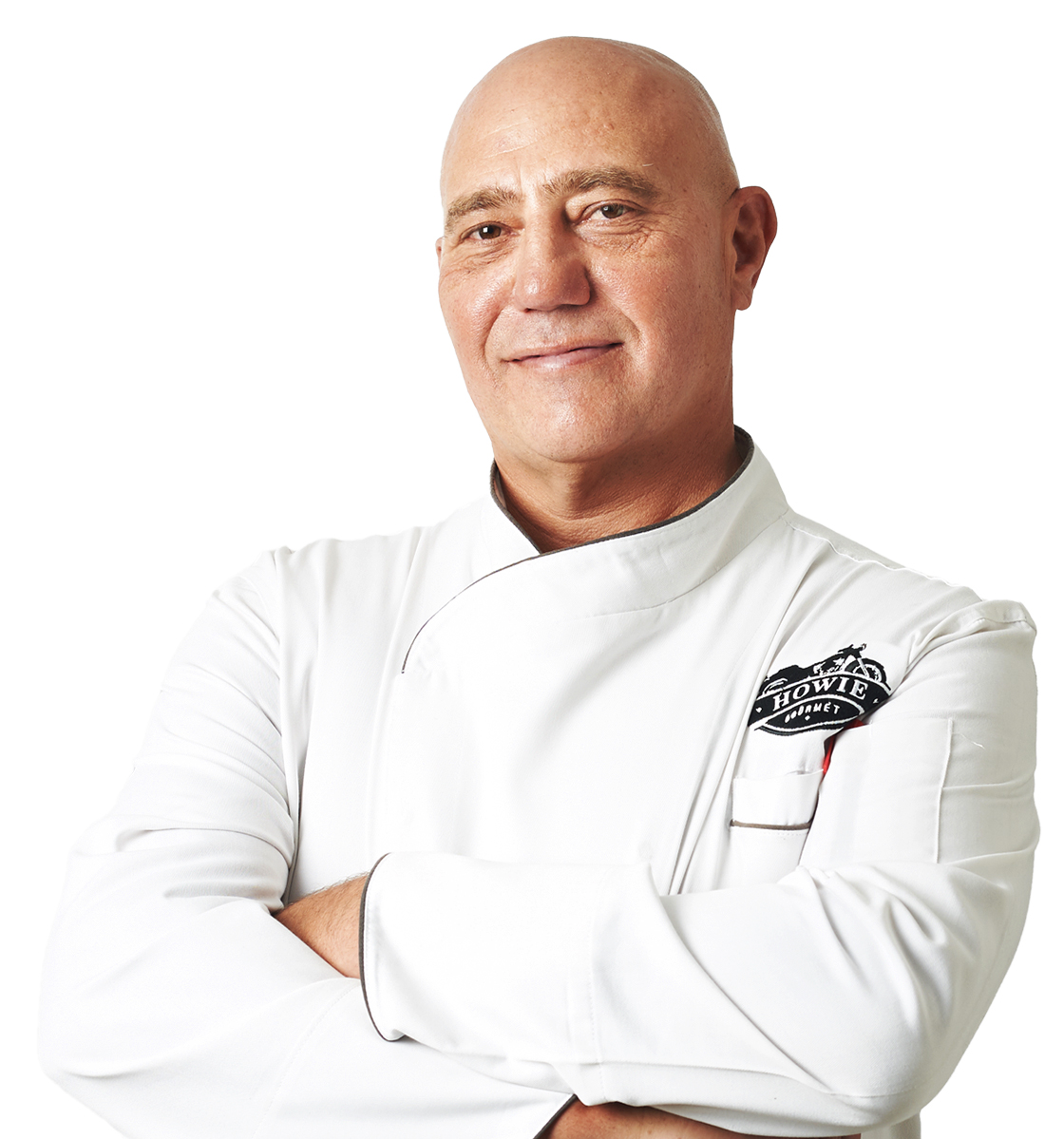 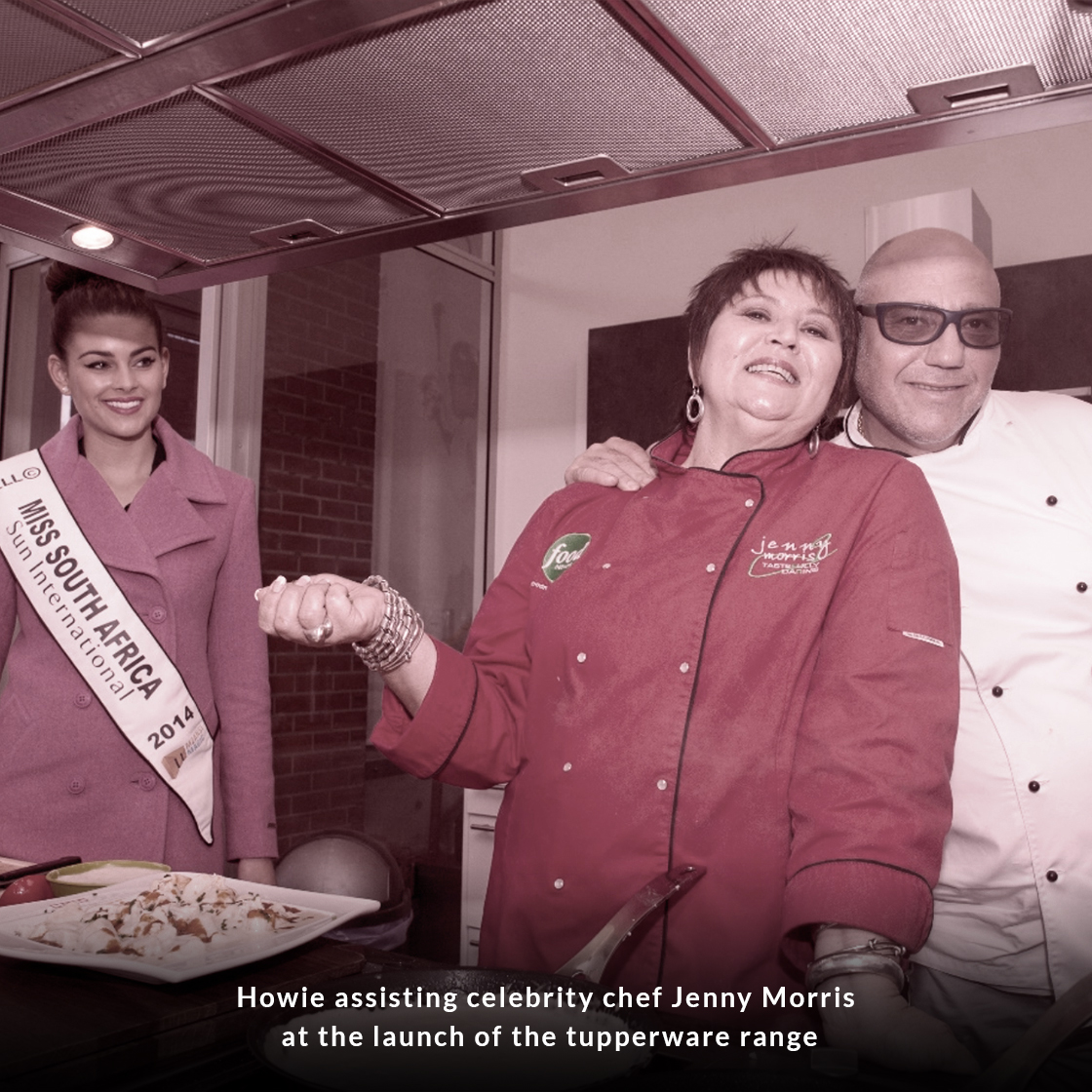 Background ambience from the casual clinking of fine crystal glasses, filled with the vintage that we’ve selected, over the subtle strains of a string quartet, that we’ve helped choose, is now also part and parcel of the menu “Du Jour” long before even the hors d`oeuvres begin to flow.

Intricately designed, and tailor made culinary masterpieces, scrutinized and re-scrutinized over a dozen pre-event tastings, are now waiting for the chef de cuisine’s cue, to send out the Entree’s in a perfect flow of dapper waitrons. Not a morsel out of place, as the conductor ushers them to serve, in a symphony of perfectly starched linen, and cutlery already shimmering, in the breath taking anticipation of quivering fingers.

Howie Gourmet is a ONE STOP SHOP

From events requiring the most sophisticated planning and execution, beyond the high walls of downtown suburbia, to simple parties and family get togethers, more often than not, on a budget of tightened purse strings.

At Howie Gourmet we understand that times are tough, for most families cutbacks are the NORM, and that your proverbial “NEST EGG” has had to be prematurely PRUNED.

What isn’t the NORM is that at Howie Gourmet our clients are all very important.

You are all VIP’s so we will conduct ourselves in that fashion. At HOWIE GOURMET higher budgets equate to nothing less than menu interpretation leaning towards the more exotic. However from there on in ALL MEALS are prepared AND DELIVERED with the same dignity and respect that your patronage deserves.

Chef extraordinaire, with a larger than life, celebrity- style personality, and an inherent ability to convert culinary craftsmanship, into a fine blend of function and event infusions.

A tribute to Suzie

Social friend or not, in the world of eventing she was the undisputed champion. Of my ability in the kitchen she had no doubt. In the lucky draw of our rainbow nation they call it TATA MA CHANCE.

On Howie Gourmet Suzie took that chance, taking us from an unknown quantity to a sought-after company, that regularly graces the esteemed stairs of our constitutional court and proudly catered at the LIGHTING OF THE ETERNAL FLAME for the celebration of our 20-year democracy.

Sue, your memory will eternally enlighten us.

Thank you very much for our gorgeous snacks!

We have never seen such stunning platters, the attention to detail was fantabulous, Those tiny bowls are too gorgeous, the snack sticks with the flowers were an awesome touch and don’t even get me started on the edible flowers…the taste of the ribs…wow! The Tiramisus….too beautiful for words and the lemon meringues were totally delicious. As for the prawn cocktails…GOBSMACKINGLY scrumptious! You truly are the best chef I have ever seen in action.

Ladies and gentlemen, if you ever need platters or creative snacks to be made for golf days, trade shows and the like, please use HOWIE’S GOURMET KITCHEN. 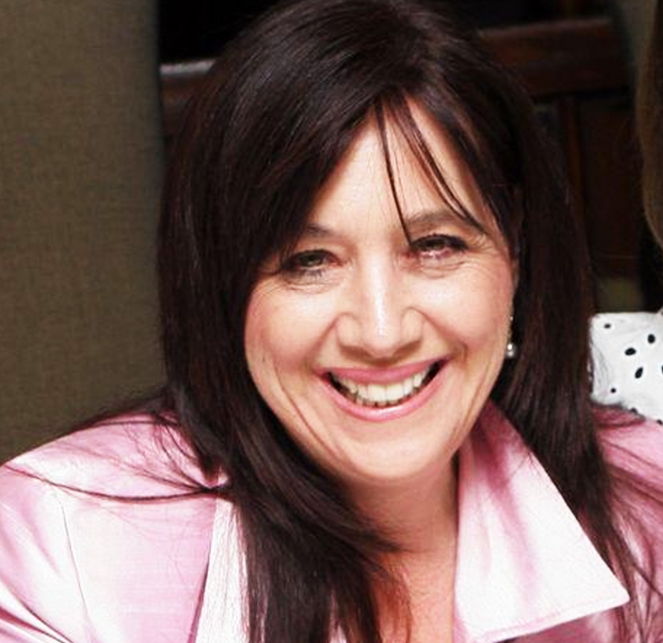 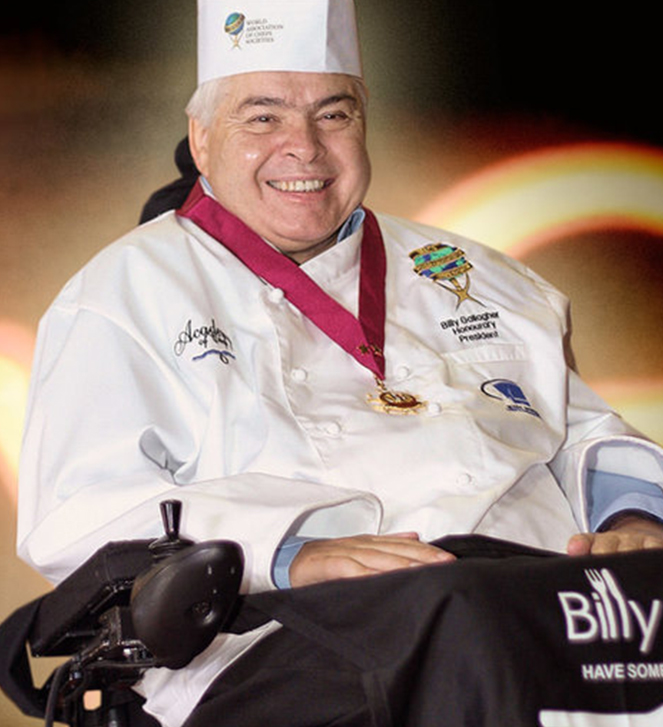 A TRIBUTE TO - DR BILLY GALLAGHER

To me he was “Chef” always was, and always will be.That was a name “BILLY” would be proud of. Behind an endless list of achievements and commendations he remained humble. Not for a minute was he in any way superior.

If you worked in a kitchen you had his respect- plain and simple. He championed South African trained chef`s over the import of their foreign counterparts.

A senseless and ruthless hijacking would to most have been the knockout blow. Lightning fast it him with the speed of a FRAZIER right hook, to the jaw of the undisputed greatest ever.

All over in a flash ( BAR THE COUNTING) as they say in the wonderful world of boxing. But like the great champion before him he rose to fight off adversity and regain his “CULINARY CROWN.”

In South Africa he had faith. A cooking “MADIBA”.

CHEF, from way up there, in your own language “KEEP IT COOKING”

Not quite “007-But equally effective in a tight situation. Behind the inferno of the chef`s tectonic plate where pots glow with the molten flow of luxury sauces is where he presides. Our production Guru who like a good diver`s watch is PRESSURE RESISTANT. Punctuality personified traffic is cut through with surgical precision. A congenial eagerness to please, has earned him rave reviews with many a special request for his attendance. One cannot help but to LOVE this guy. And that’s why we say – FROM” RUSSIA “WITH LOVE

And boy does she produce some GOODIES. THE hum of the KITCHEN AID, the pastry workhorse in a surround sound of feverish whisking The perfect yolk in it`s cloak of sun burnt orange splattered into a “Montage” of farm fresh butter creamed together with powdered sugar- The icing on the cake-Rivulets of egg whites fluffed into the snowy peaks of Pavlova land, or the ” Chinook” rotating of the paddle beating, slapping dough into life, Golden fried vetkoek the heart foundations` reluctant survivor.
She bakes from the heart. So if it’s Ouma’s hot buttered scones, *Aunty Gertie`s cheesecake or incorporated mousse from the chocolate at Lindt Goodness always always keeps us in touch. *Gertie Awerbach- Former Food Editor – The Citizen Newspaper 17 years – Cooking with Aunty Gertie Standing behind you was rather intimidating- even for me.

African lore suggests the handing out of nicknames as a term of endearment.
Mine is SCHVUBA or BIG CHEST. A beautiful portrait springs to mind- behind the glowing coals I serve, Chanting- the chef`s war cry – Chest pumped forward- sweating rivulets – always aggressive, poised to strike out at the grill, a cluster of chops waiting to be turned, the fatty parts crisped up perfectly- in my mind`s eye- the crazed chef- action man Buddah – I know why they call me SCHVUBA. As I said at HOWIE GOURMET we’re so more than just a team.

He comes to the party in an inspired recipe of talent and mischief in equal proportions. A natural behind the action bar station he entertains you with a cherubic flair.
All his dishes completed with a smiling essence to bring out the flavour.
Chef “du jour”- if it’s Soul Food you desire then he’s your “Catch of the day”!

Learning her trade in the ” cold kitchen “. No such thing as just the ” SALAD LADY” she plays an integral part in the conveyor belt of daily meals that is our BREAD AND BUTTER.
Winnie’s ” Festive” Bread and butter pudding, Italian Christmas bread (Panettone) buttered and jammed with luxury comfiture, a scattering of sherry soaked Montegu sun dried berries dusted with cinnamon and a pinch of freshly grated nutmeg- set in the oven and toasted under the grill with a sticky melt in your mouth ” marshmallow- y nutty nougat.

Personal Assistant and office manager who stoically shuts out the background mayhem of kitchen pandemonium. Sifting through the daily crossword of requisitions, furnishing us with only the barest of cryptic clues, has made her an expert in the archaeology of function deciphering.

She’s my mom. The chief purser. Not to be underestimated she goes about her business with a Margaret Thatcher- like iron fist.

``MOUTH TO MOUTH `` with my community

Like the Medical duties that I performed in my Army years, I would very much like to breathe life into, and participate in the resuscitation of the community around us.
With their community outreach programs, some of our larger clients
do Yeoman-like work in this arena. At Howie Gourmet, we’re always willing to lend a helping hand for these events at a reduced pricing structure. On occasions these have been donated ” free & gratis” be it for orphanages, kiddie’s parties or cakes for the Gogo’s at the old age home. On an informal level, we have many a happy benefactor from our Gourmet leftover treats that our staff drop off to the needy, sometimes way into the early hours of the morning. Future staff involvement projects could even be the making of compost for the Community vegetable patches that are scattered around the informal settlements.
A particular favourite of mine has been as unofficial sponsor of the Banakekeleni football academy. The team was initially given no chance at success, and watching them battle their way up the league, has been a highlight and privilege. Sadly, they have recently lost their main sponsor and we are looking at ways to help them out of this predicament. One must always remember the old adage, that charity begins at home, but hey, if you’re willing to support us, then we’re more than happy to support your company initiatives. 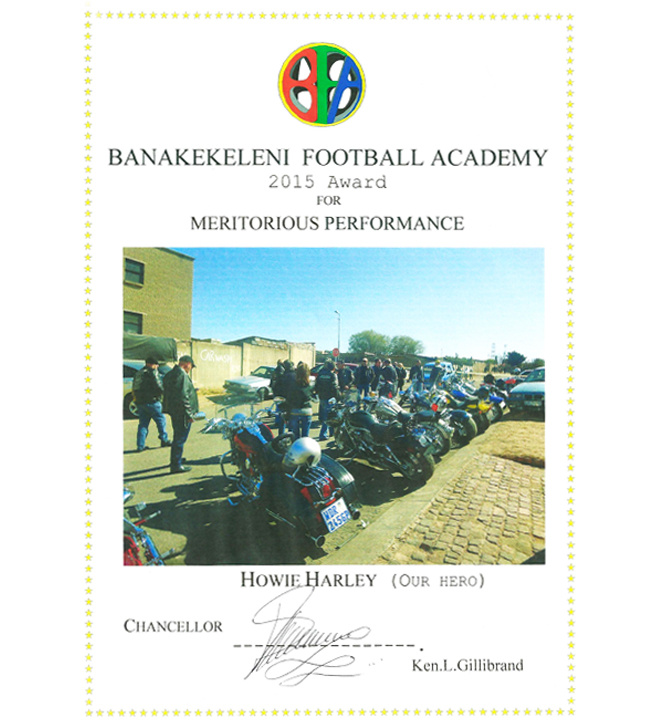 In conclusion, it would be prudent for me to thank CHEF PERSONIFIED MANFRED REINHARD for preparing me not only for a life in the kitchen but indeed instilling in me the general lessons of life that have helped to shape me into the man I am today. It’s no surprise that this kitchen iron man champion also prevails in it’s sporting counterpart of IRON MAN CHAMPION in the over 50’s category for the last 3 years running. Manfred- Thank you for seeing in me what nobody else could see whilst I was a trainee chef. 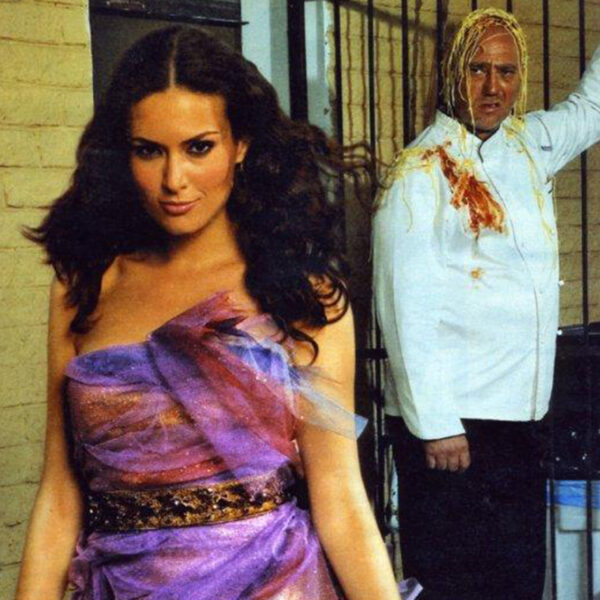 As featured in ``YOU Magazine`` 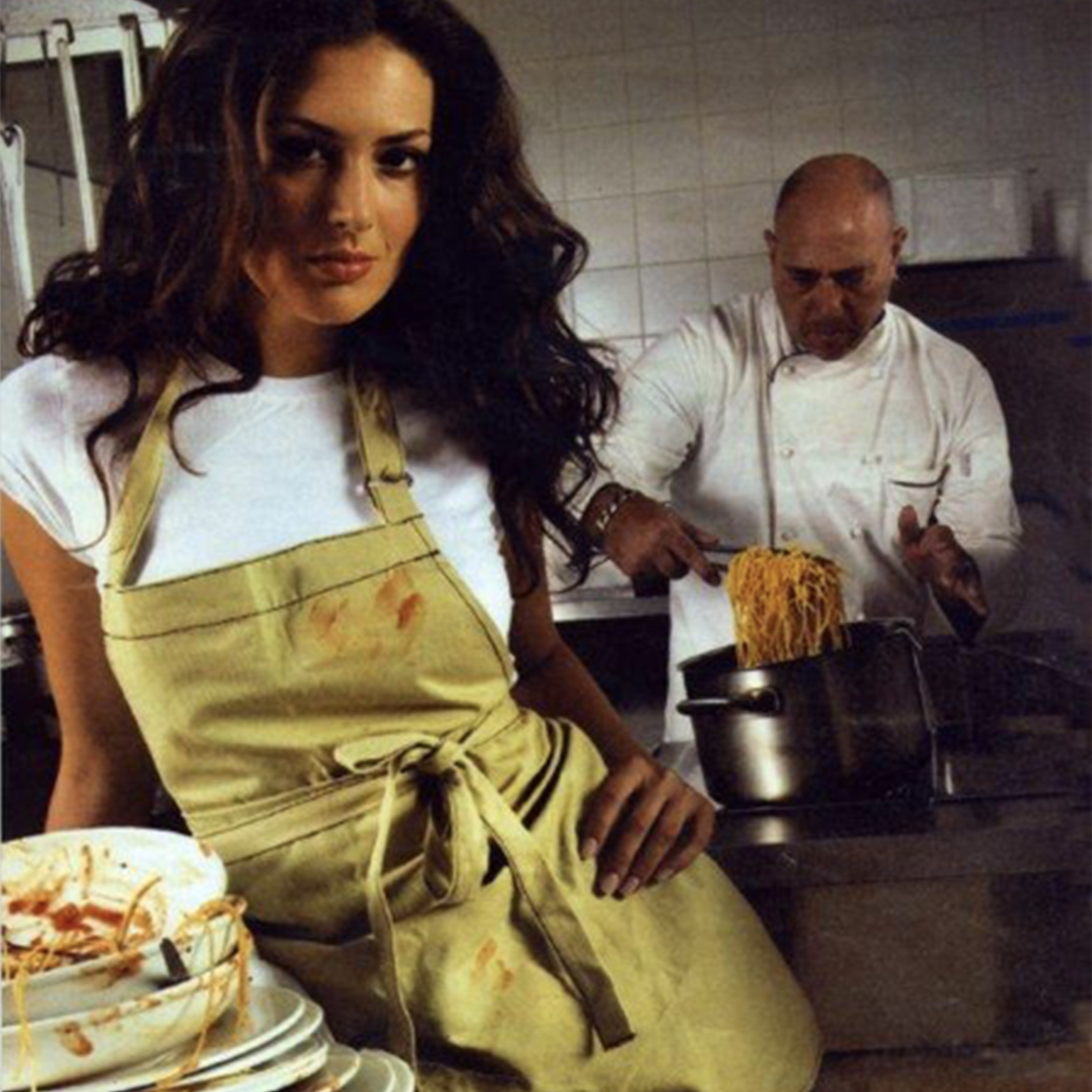 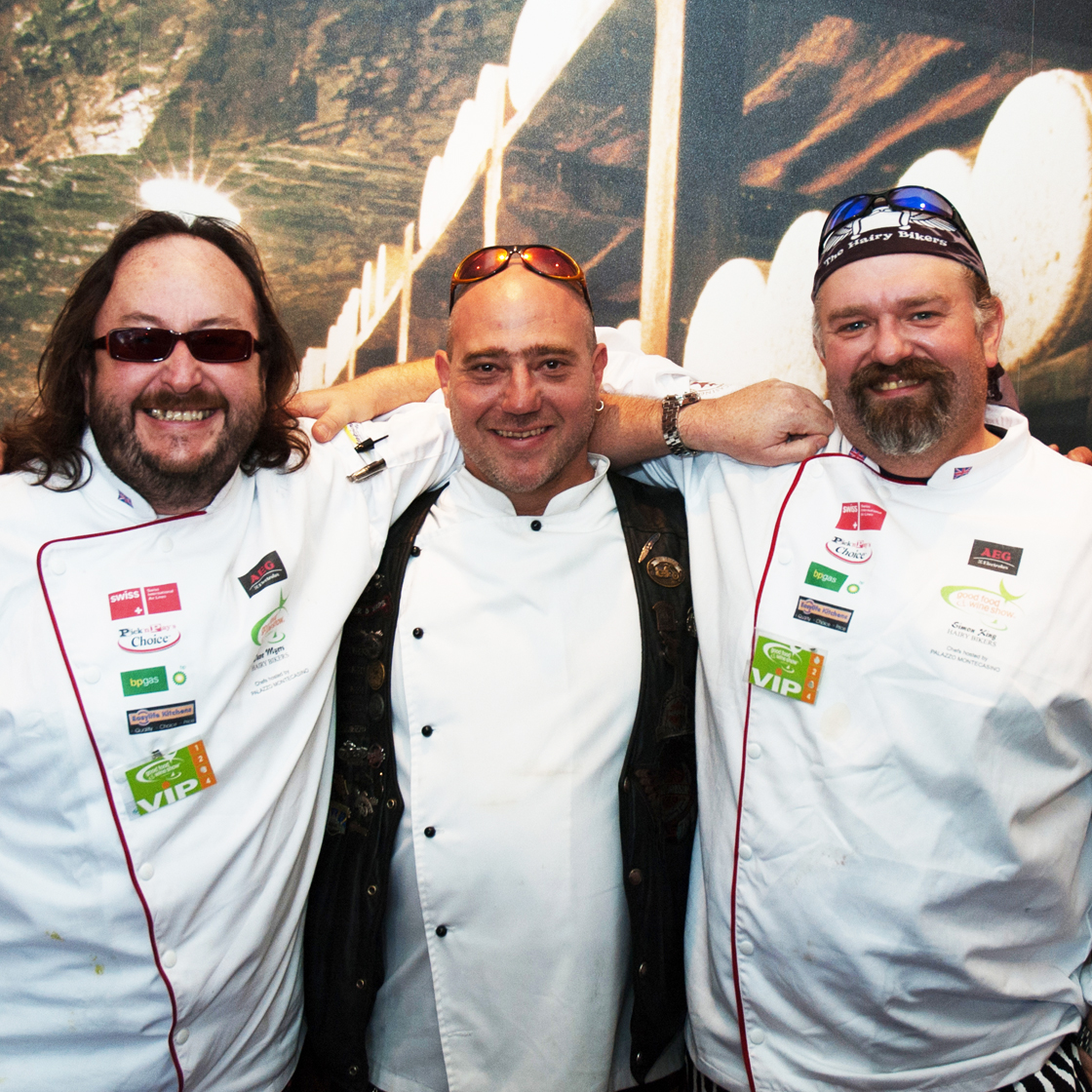 Looking for that special ingredient?